I would like to thank Marc Potocnik, founder of renderbaron, for contributing to our blog and sharing insights and useful tips around one of his latest Project:”The Power of Connected Vehicles“.

In the following article he shares his approach around the creation process of this film project. It involves creating animated sequences of several minutes to illustrate the complex topic in a filmic way including renderings with Renderpeople 3D People models as main actors in Cinema 4D.

Please enjoy the following story from our friend Marc Potocnik:

German automotive electronics manufacturer DSA asked my studio renderbaron to visualize DSA’s After Sales solutions for connected vehicles during use and maintenance. The client wanted an animated film of several minutes to illustrate the complex topic in a filmic way.

In 2018 my studio already created an animated movie for DSA. This first project also dealt with the topic “Connected Vehicles” but with focus on automotive manufacturing (DSA – Smart Diagnostic Edge). The intended look was that of an attractive process visualization. The goal for the 2020 film “The Power of Connected Vehicles”, however, was to create a more cinematic, richer and highly realistic look. 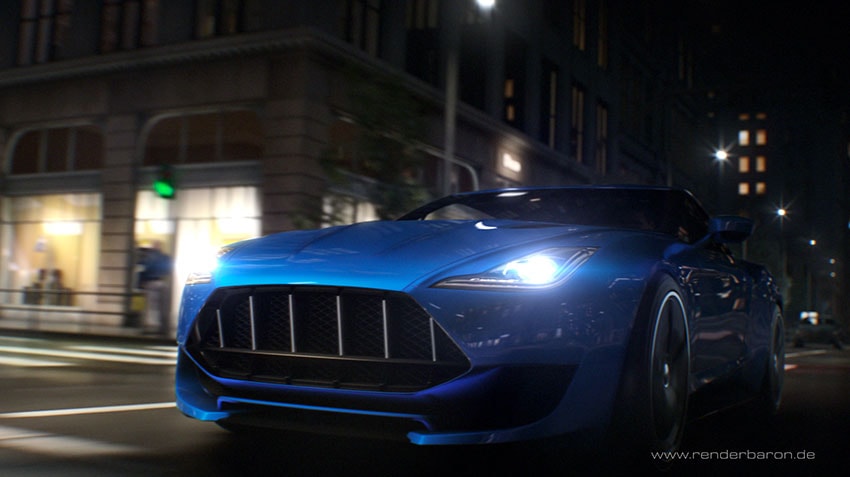 Concepting and visual styling with continuity in mind:

Based on the content specifications and the storyboard of the client DSA, pictures are more or less initially created quite intuitively and fast in my mind.

• How can I establish the topic in an appealing way?

• Which filmic techniques do I use for camera work and light?

• Which look & feel do I want to create?

Things that lie within my own visual experience seem to play a major role – again and again I find that the scenes I build resemble impressions from my own environment: the exterior shots from “The Power of Connected Vehicles”, for example, remind of the Media Harbor and Königsallee in my home town Düsseldorf.

The 3D animations were created with Cinema 4D S22. The internal Physical Renderer was used for rendering via Team Render. One of the central tools in Cinema 4D for the project was the Standard Material System of Cinema 4D. It allows the creation of a variety of simple and complex materials in an intuitive and fast way. Recurrently used features were Layer Shaders, Noise-Shaders and material-specific BRDFs in the Reflectivity Channel. 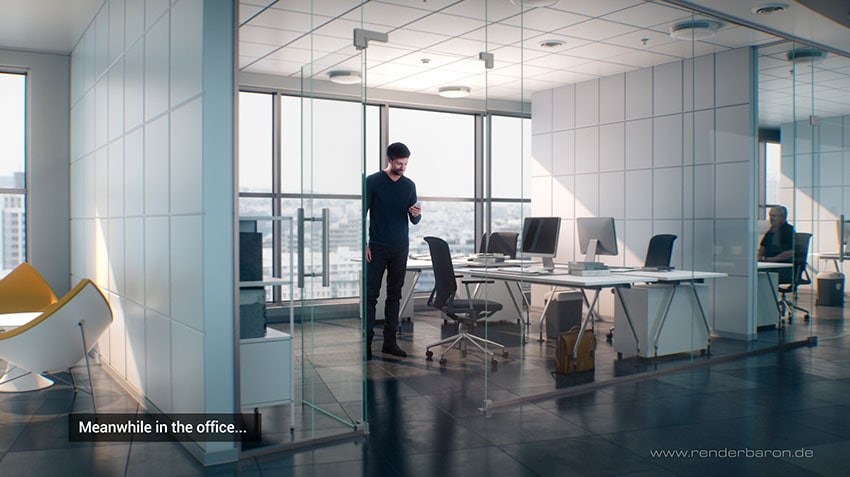 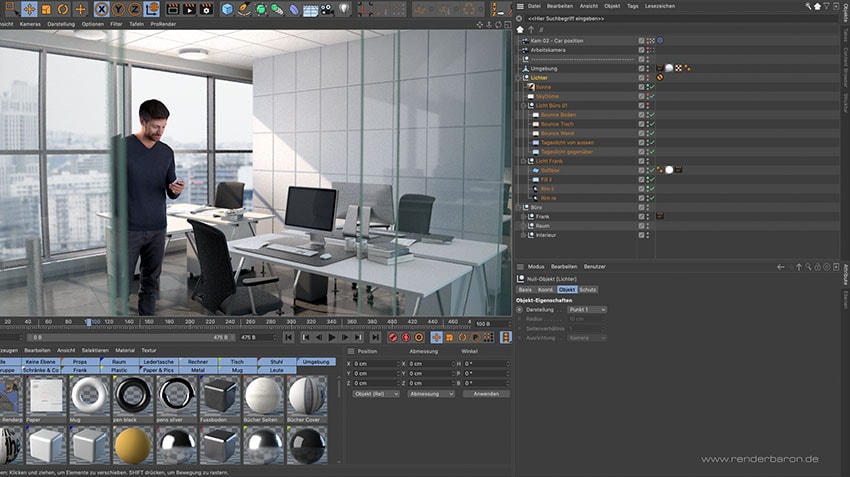 Compositing was done in Adobe After Effects CC 2020. The main goal of compositing was color and gradation correction, as well as an analog look by adding optical artifacts such as glow, lightwraps, film grain or chromatic aberration.

1) A creation process thrives on iterations. If you are happy with a visual result, sleep on it for a night and make it a bit better the next day.

2) Create rich and realistic Eye Candy the audience wouldn’t expect in that respect.

3) It doesn’t have to be correct, it just has to look correct.

Digital actors can be central to presenting processes in a convincing and appealing way. They bring life into a scene and offer the viewer an emotional true-to-life approach. Used as digital extras for the background, they fill scenes and provide a scale for the viewer. 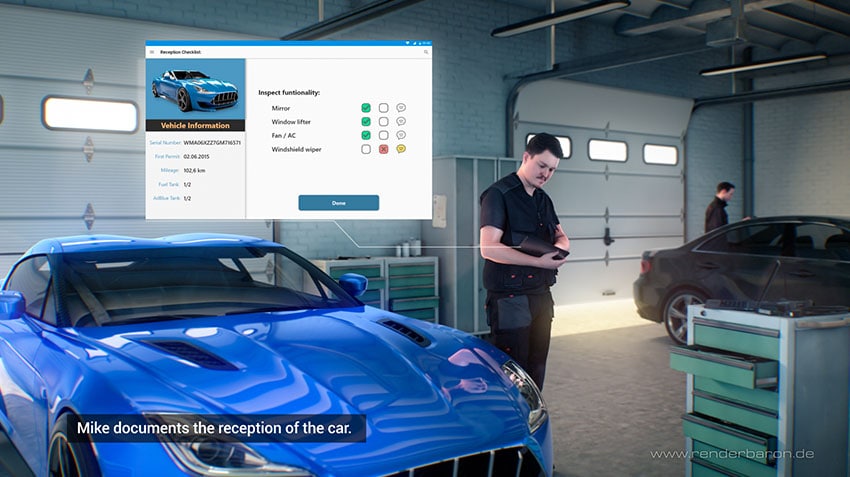 The different poses of a figure can also be used to show temporal sequences, e.g. “Mike” in the workshop who first awaits and then checks the car. 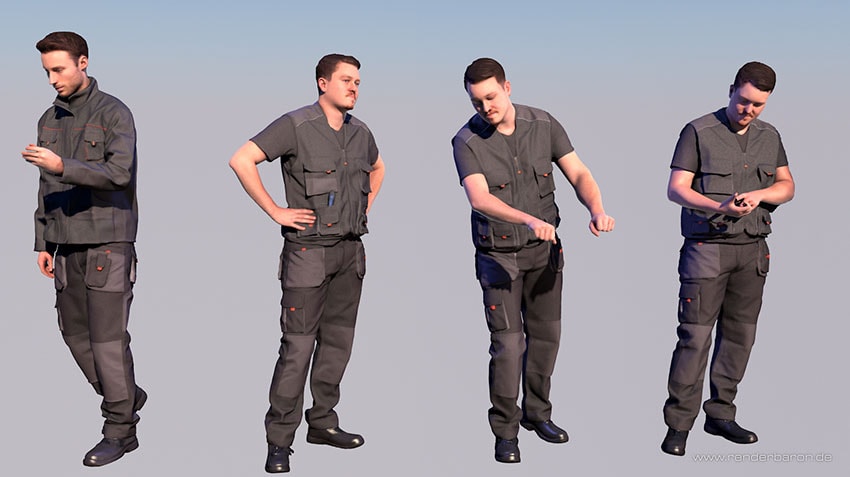 Renderpeople are used directly in the respective scene. This ensures that the digital actors interact correctly with light, environment and camera. The high quality of the HiRes-People enabled its use as a central narrative element. The selection of the poses was then made according to the content specifications of the clients storyboard.

In my animation work I prefer to use only Direct Illumination and to render without Global Illumination. Why? Because I like it… and because I can.

Jokes aside: it allows you to directly control every imaginable aspect of light and it enhances your own lighting skills. In addition, it can offers serious advantages in speed and predictability when rendering animations with thousands of frames.

renderbaron is a studio for animation and design in Düsseldorf. Since 2001, renderbaron has been producing high-quality 3D animations, visualizations and visual effects for renowned clients. Owner and founder Marc Potocnik studied communication design at the University of Applied Sciences Düsseldorf and now has 23 years of professional experience.

3D People for Archviz – Are They Worth a Try?!